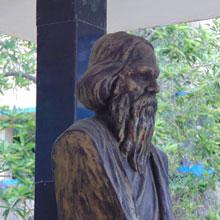 Bengali, also known by its endonym Bangla (বাংলা), is an Indo-Aryan language primarily spoken by the Bengalis in South Asia. It is the official and most widely spoken language of Bangladesh and second most widely spoken of the 22 scheduled languages of India, behind Hindi. In 2015, 160 million speakers were reported for Bangladesh, and the 2011 Indian census counted another 100 million.

The official and de facto national language of Bangladesh is Modern Standard Bengali (Literary Bengali). It serves as the lingua franca of the nation, with 98% of Bangladeshis being fluent in Bengali (including dialects) as their first language. Within India, Bengali is the official language of the states of West Bengal, Tripura and the Barak Valley in the state of Assam. It is also spoken in different parts of the Brahmaputra valley of Assam. It is also the most widely spoken language in the Andaman and Nicobar Islands in the Bay of Bengal, and is spoken by significant minorities in other states including Jharkhand, Bihar, Mizoram, Meghalaya, and Odisha. With approximately 250–300 million total speakers worldwide, Bengali is usually counted as the sixth most spoken native language in the world by population.

Dictionaries from the early 20th century attributed about to 50% of the Bengali vocabulary to native words (i.e., naturally modified Prakrit words, corrupted forms of Aryan words, and Native Austro-Asiatic e.g. Munda, Dravidian words (non-Indo-European native languages). About 7% percent of Bengali words are unmodified Sanskrit, and the remaining words are from Persian, Arabic, Turkish, English, Portuguese, French, and other languages. Dominant in the last group was Persian, which was also the source of some grammatical forms. More recent studies suggest that the use of native and foreign words has been increasing, mainly because of the preference of Bengali speakers for the colloquial style.

Bengali literature, with its millennium-old history and folk heritage, has extensively developed since the Bengali renaissance and is one of the most prominent and diverse literary traditions in Asia. In 1999, UNESCO recognized 21 February as International Mother Language Day in recognition of the language movement in East Bengal (now Bangladesh). Language is an important element of Bengali identity and binds together a culturally diverse region.